Home » Parenting » Baby/Toddler » Aiden is getting his first tooth! 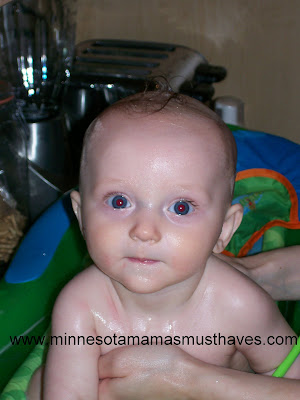 Aiden is 5 1/2 months old now. He is just getting his first tooth! Danika didn’t get her first tooth until she was over a year old! She was late in getting teeth. It is crazy to me how different the two of them are from each other. Aiden has been a drooly, fussy little guy while the tooth was cutting through. I first suspected it long before it came. He was cranky and drooling and chewing on everything. Then he got an awful diaper rash and I thought for sure then that he was teething. Whenever Danika got teeth she always had a horrid diaper rash to go along with them. I wonder why that is? Well I’m happy to report that his bottom is better and the tooth is half way in! Now if I can just get him to stop biting me when I nurse! Ouch! 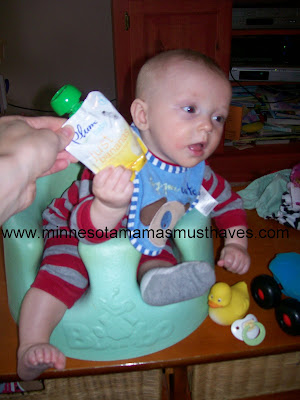 I had started giving him rice cereal a few weeks ago. At first he loved it and now he refuses to eat it. I just tried giving him some bananas though and he loves them! Maybe we’ll have to mix in bananas with the cereal? Since he hasn’t been crazy about eating solids and is gaining weight just fine I haven’t really started pushing them on him yet. Once he is six months old we will start more of a regimen but if he just wants milk for a couple more weeks that is fine with me! We’ll let him get through this first teething episode before we start changing things on him!
Isn’t it crazy how different one sibling is from the next? My two kids looked nothing alike at birth. Danika was the spitting image of David’s baby picture and Aiden was the spitting image of mine. Danika was the easiest baby ever and Aiden has been our colicky little guy. Danika breezed through teething and never fussed, Aiden is not liking teething! Danika too cereal like a champ at four months and Aiden doesn’t care for it. Danika took a bottle no problem and Aiden likes nothing but the breast. One thing they do have in common is that they both love their blankies. They also both love NUK pacifiers.
I have found that I deal with them differently. Aiden is needy and requires a lot of attention. Danika would just cuddle or lay wherever you put her. I think Aiden should have been our first when I had all the time in the world to cuddle with just one baby! Aiden requires a lot of patience and love. He is such a little sweetie though. He has the biggest smile and I know that under all of his crying he really has a sweet demeanor. I’m hoping 6 months is the age that his colicky behavior magically disappears!

You just never know how different two kids can be until you have them! They are both blessings and I love them so much! It is so fun to have a baby in the house again (even if he is fussy!). Are your kids really different from one another or very alike? Do you parent them differently?