This post brought to you by Sam’s Club. All opinions are 100% mine.

We have had our dog Max since just after we got married. He came before the kids came along and once upon a time he was my baby. I pampered him and treated him much like my child. He had clothes to wear, toys galore, fancy treats and lots of love and attention.

Then we started having babies and my life got busier and busier sending Max to the backburner and earning him “dog” status. He no longer was treated like my baby because I had a baby to take care of. Now with four kids running around I can officially say that I do not have time and energy to love on him like I did before I had kids. He certainly doesn’t go uncared for though! Now there are just more of us to love him.

When Max was young we took him to obedience school and taught him how to behave and follow commands using treats as rewards. Now that he is getting to be an old guy at 9 years old, we use treats to reward his good behavior. I’ve noticed that the better the treats we give him are, the better he responds to us using them as a reward. If they aren’t his favorite treats then he is less likely to do what we want him to. If they are the ones he likes best, like Beggin® Strips, then he will do just about anything for them.

The kids love Max and he is fiercely protective of them. He won’t let strangers near them and if another dog tries to get to close then he will intervene there too. I love that he loves the kids so much even though Carson’s hug looks more like a headlock! Max doesn’t mind.

Our oldest child, Danika, is the closest with Max. Perhaps since she was firstborn and had the most time to bond with him. They are best buddies and he will do anything for her. He will listen to whatever she says even when he doesn’t listen to me! If I tell her to tell him to do something he will do it. They play dress up, cuddle and he even sleeps in her room, often sneaking his way in to snuggle her.

I want to reward Max for being such a loyal and protective dog so I buy his favorite treats, Beggin® Strips. They are truly a reward for him because he loves them! 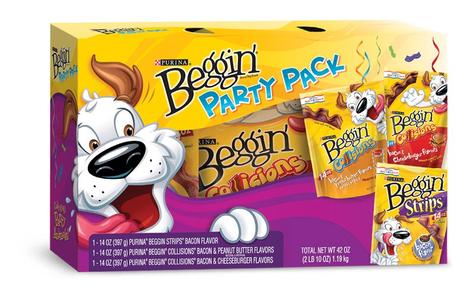 When I was shopping at Sam’s Club I saw a new Beggin’ Party Pack that I had to pick up. The price was right and it contained three 14 ounce packs of the most popular flavors. Sam’s Club members got to vote for their favorite flavors and the votes are in and comprise the new Beggin® Party Pack! The winners are Bacon flavor, Bacon & Cheese flavor and Collisions: Bacon & Cheeseburger! I knew Max would love them! They are perfect for rewarding my dog for his great behavior and showing him how much we love him.

How do you reward your dog’s good behavior and show him you love him?